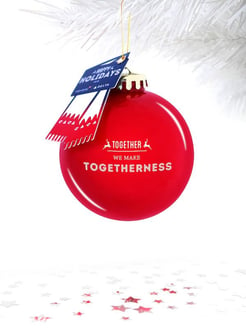 Christmas “adverts” in the UK are a big deal—like Super Bowl ads in the US. An estimated $7 billion was spent last season on heartwarming, humorous holiday commercials that capture the Christmas spirit including Moz the Monster, the Heathrow Bears, Snowed In, and Kevin the Carrot.

“We thought we could do something similar to get people in the US talking about the Virgin Atlantic and Delta Air Lines partnership,” explains Michael Anthony, Channel Marketing Manager at Virgin Atlantic. The company used a novel approach to promote their Christmas video, The Prodigal Brother, and connect with key customers.

While Virgin did not run TV ads, they did buy digital ad space and promoted their video on social channels. “We also wanted to use a direct and personal approach to reach 250 strategic partners,” notes Anthony.

A Promotional Christmas Gift…With a Twist

Annual customer promotional Christmas gifts were an obvious and timely way to reach partners. Virgin and Adform quickly brainstormed several different holiday promotional holiday gift ideas that had a tie-in to the video—something that would make the connection that Virgin wanted. “We decided on a Christmas ornament with the text ‘Together We Make Togetherness’ printed on it,” says Anthony.

The promotional ornament was packaged in a custom, white box with red tissue paper to make the experience impactful.

The most challenging part was completing the customer gift experience. What would get people, at the busiest time of the year, to put down the promotional Christmas ornament and watch a video? What would be more engaging than printing a YouTube URL on the tag? “We decided to use some cool, new tech,” says Anthony. “Augmented reality!” With the Digimarc AR app, customers just point their smartphone to the ornament’s scannable card to get transported to Virgin’s video on YouTube.

Virgin Atlantic considers the promotional campaign a success. With more than 777,000 views on YouTube, The Prodigal Brother got the exposure the company wanted. Adweek even named the spot “Ad of The Day” in December.

Anthony and his team at Virgin are pleased with the partner campaign, too. For months, corporate travel managers and customers commented on how creative the promotional Christmas gift was. Not only did the scannable card get people to watch the video, but it also provided a viral component. Other people wanted to have the unique experience of connecting to the video from the card.

“We never just slap our logo on a promo item,” says Anthony. “We always take the next step. The scannable card helped us make an ordinary giveaway item into something special. To make it Virgin.”

Top 10: Made in the USA Products