In the News: Champion's Campaign "Be Your Own" 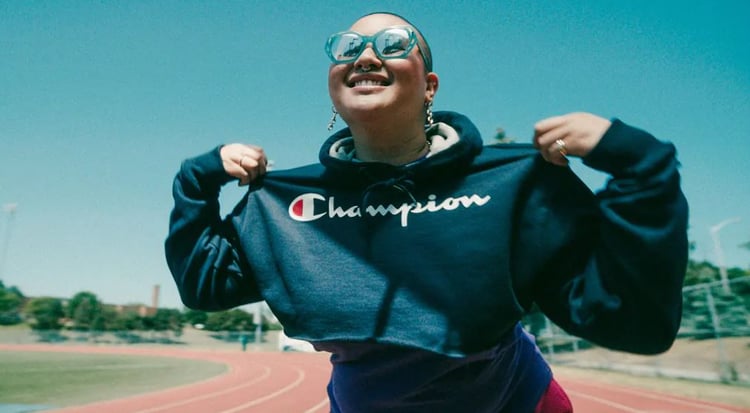 Champion is calling an audible on its penchant for modesty.

For the launch of its “Be Your Own” campaign, the centenarian athleticwear brand proudly proclaims “Champion invented the hoodie,” the wardrobe staple that’s transcended sports into music, fashion, and popular culture since it was created by the brand’s founding family more than 80 years ago.

A new spot—produced by agency partner Energy BBDO—is slated to debut on ESPN during the Ohio State vs. Notre Dame football game on Sept. 3 and features a diverse cast modeling a colorful array of hoodie styles.

Amid quick cuts of the models playing various sports, the narrator channels his inner hype man to inform the wearer “we invented that,” before declaring they ultimately “make it their own” by wearing it. 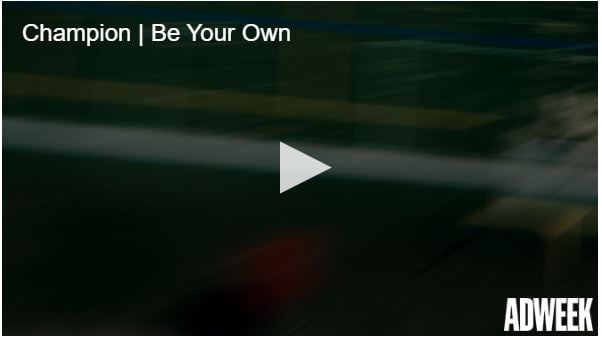 In addition to ESPN, the campaign will run on linear TV, online and streaming video, in-store displays and across the brand’s social media channels.

While many brands might use archival footage to present receipts documenting historic achievements, Champion vp of global marketing John Shumate said the goal was to look toward the future.

“We wanted to reach a young consumer,” Shumate told Adweek. “Our data points revealed that [we were] skewing a little bit older. And we wanted to connect with that 14- to 24-year-old. We wanted to let the younger audience know that the hoodies they were wearing were developed and innovated and originated by the Champion brand.”

Shumate—who joined the brand a little over a year ago after stints with PepsiCo, MGM Resorts and sports teams including the Miami Dolphins and the Orlando Magic—acknowledged that millennial and Gen Z consumers may not be as familiar with the brand’s history, but they are digitally native, which presented an opportunity to challenge them to get to know the brand better—and to engage with it.

“This [campaign] is really just to grab attention, really have the energy. Get people excited and thirsty and hungry for more,” he said.

He describes this particular campaign as long overdue. “We have a very rich and strong heritage,” he added. “But one of the key things we realized is that we’re not telling anyone about it. We want to do a better job of storytelling.”

That’s in part because the word “champion” is typically associated with success, and the brand is looking to broaden that definition.

“We all know that there’s more to life than just winning,” Shumate said. “It’s about playing the game. It’s about the effort in the things that you did to be the best person, and sometimes it’s just going out and just doing your best.”

Originally founded in 1919 in Rochester, N.Y., as the Knickerbocker Knitting Mills, the company was renamed Champion in the early 1920s when brothers William and Abe Feinbloom inherited the business and transitioned it from producing traditional knitted goods to heavy wool knit sweaters that protected outdoor workers from brutal Northeastern winters.

The sweaters would later become popular at military academies before the brothers expanded their product assortment to include athleticwear and began selling directly to college athletes and coaches.

Those relationships led to the creation of the hoodie, which was designed in the 1930s through the input of athletes who wanted a warm-up garment to wear while sitting on the sidelines between games and practice sessions.

It was also in the ‘30s when the brand revolutionized the flocking process, which allows college logos and screen-printed letters and numbers to be added onto jerseys and other apparel.

In fact, the Museum of Modern Art in New York acquired one of the brand’s oxford grey Reverse Weave hoodies from the ‘80s for its permanent collection of society-impacting fashion items in 2017.

“A lot of collegiate students get introduced to the Champion brand in the college bookstores with our Reverse Weave product,” said Shumate, who called it “the O.G.” of the brand.

“We’re a 100-year-old-plus brand, and we’re really trying to establish ourselves for the next hundred years,” he added.

Still in the game

In addition to celebrating the upcoming 70th anniversary of the Reverse Weave hoodie, Champion also has partnerships in the works with Disney and upscale street fashion retailer Social Status, with whom it is collaborating to design an HBCU capsule collection.

The brand was also featured in a challenge on Amazon Prime’s reality fashion competition series Making the Cut, which Shumate said resulted in strong online sales for both Amazon and Champion.

But sports are indisputably Champion’s specialty.

The company recently expanded its partnership with the Premier Lacrosse League to include the uniforms worn on the field during play, and will continue to work with high schools and small college athletic programs. In the coming weeks, the brand will also launch a page dedicated to merchandise designed exclusively for its college and university partners.

For Shumate and the brand, it all falls under a mission to bring community, comfort, celebration—and fun—to whoever makes Champion products their own.

“Champion is an authentic athleticwear brand,” he said. “[The Feinbloom brothers] came to the United States and really changed the game. They put the consumer first. And we want to continue to do that.”