Each day, 13,000 workers are injured on the job. That’s a staggering 4.7 million incidents per year!* To help reduce leading causes of work-related injuries, The National Safety Council and thousands of organizations across the country observe National Safety Month each June.

In recognition of National Safety Month, we asked an adform customer, UNFI, how they improve safety in the workplace. We hope these creative ideas help your organization, too! 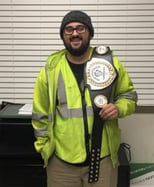 UNFI recently updated their safety program that touches 200 employees across four shifts in the cooler/freezer department. The food distributor’s program is using a championship boxing-belt theme to promote four critical components at the company: safety, attendance, production, and quality.

Each month, one individual from each of the four shifts (self-named teams Under 90 Days, Wolfpack, Honeybadgers and Thundercats) with the highest combined scores is crowned champion.

Winners are recognized at a department-wide award ceremony when they are presented with the coveted belt and have their picture taken. Winners also receive a dinner at their choice of restaurant and $100 worth of UNFI apparel from Adform.

“We have already seen positive changes,” notes Troy Christy, Warehouse Manager at UNFI. “There’s excitement. Everyone wants the belt. Employees, sometimes jokingly, beat themselves up if they don’t win it.”

To stay top-of-mind with employees, a highly visible trophy case in the lunchroom features the winning employees’ pictures and their belts. “I was surprised to have different winners each month,” adds Christy. “It’s great to change things up and give everyone a chance to win.”

The last piece of the program is a clever one. The monthly winners get to operate a slick, new, black pallet jack for the month. “We have four pallet jacks that feature the same graphic on the team’s belt,” said Christy. It may not sound like much, but employees like to have use of the best equipment while fellow employees are using standard, red pallet jacks. “It has a bit to do with bragging rights,” offers Christy.

Given the early and positive feedback about the program, UNFI expects the friendly competition will improve our metrics in the department. At the end of the day, when employees win, everyone wins!